Ellen Degeneres has long been one of my favorite celebrities. Scratch that – one of my favorite humans. I love what she stands for and she makes me belly laugh. It has been a pipe dream of mine to attend a live taping of one of Ellen’s shows. I knew the likelihood of attending a show was slim but hey – a girl can dream, right? 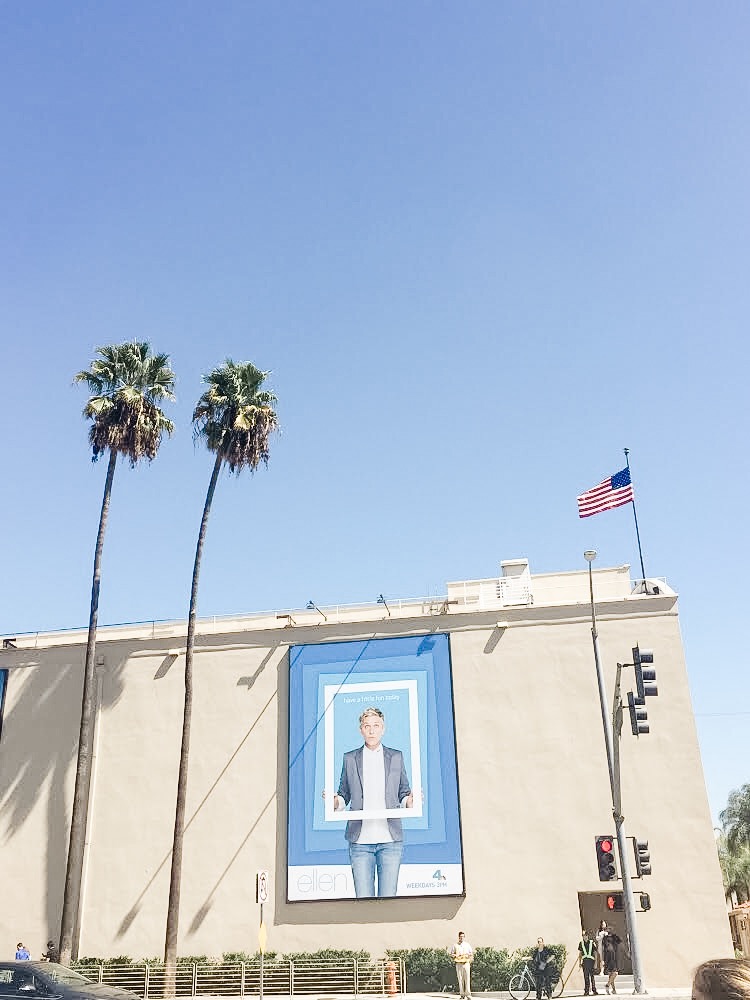 I was perusing around Twitter during my daily social media check during the summer of 2017 when I saw on @TheEllenShow had tweeted asking if there was anyone interested in attending a taping of her show. My answer was “well of course, Ellen!” I clicked on the link and was sent through to a simple calendar to select the dates that best worked for me. Figuring millions of others were also filling out this form I didn’t think much of it. I randomly selected a few dates for September, clicked submit, and didn’t think about it again.

Cue September 6th when I have an email in my inbox from Corey from Ellen Audience providing details about the tickets I selected. I was at work when I opened the email and went into to FULL ON PANIC MODE. At first I didn’t believe it was real but after seeing the email address, sending a quick text to a friend that used to work on Ellen, I surmised it was real. The email stated that this wasn’t a confirmation of my tickets but rather my notice of being eligible to add my name to the queue.

I responded within 35 minutes with my contact information and the name of my presumed guests. I then ran around my office squealing with friends about the possibility of going. The reality that I live in upstate New York while Ellen films in Burbank, CA had not yet occurred to me.

Not even two hours later I got a response.

“CONGRATULATIONS! You are confirmed with 4 Guaranteed tickets for 9/28/17”

I. could. not. believe. it. I was instructed that a packet of information would be sent the week prior to the actual taping. I was over the moon!

I’ll admit, it was a challenge convincing my husband to spontaneously fly across the county (with just a few weeks notice) but after lots of begging and pleading, flights were booked.

Our welcome packet instructed us on where to park, what to wear (bright colors), and what time to arrive. We stopped at Starbucks for a caffeine pick-up and then headed over to the Warner Brothers lot. We grabbed lunch at a nearby Mexican restaurant after parking and then quickly headed back to Warner Brothers.

Right within the parking garage there was a roped off seating area for Ellen guests. There were security guards who looked at our ID’s and my ticket confirmation before stamping our wrists with a black light stamp. There was a bit of waiting around before the producers and staff pulled up in golf carts. They immediately started scoping the crowd for “high energy” individuals. We chatted with one guy who mentioned to meet him when those selected were called.

After more waiting, and sweating, we were handed surveys with silly questions. Then, we were told to get into line where we’d be assigned a number. After looking at our ID’s one again, they confirmed we were on the list and handed us our numbers. We had 117-120.

The staff then came over the mic and asked those individuals that had been spoken to by production, to meet them out back at the Bungalow. This was basically a mini-audition to be one of the contestants should there be a competition on the show. They asked to show your energy and excitement and they’d be selecting 12 people. I knew it wasn’t my gig so we politely were told to go back to regular holding. A few women next to use got selected and man – were they over the top! I would need to be drunk for that kind of action.

We went back to the parking garage and handed in our surveys. They then finally told us who our guest would be – LL Cool J! They then started calling the groups of 30. The first group was VIP. Next, they came back for numbers 1-60. Then, FINALLY we were called.

We followed the leader and had to stay in line exactly according to our number. We were walked across the street before entering through security. They searched bags and had us walk through a detector. In the dark narrow hallway, there were TV’s suspended from the ceiling and pictures of previous Ellen guests.

This narrow hallway led into the Riff-Raff room (aka the Ellen store). They only let numbers 1-120 into the Riff-Raff room, everyone else had to wait in the hallway until they were ready to film. People mad dashed to the merchandise and the line wrapped around the room. After a bit more waiting, they announced we needed to turn off our cell phones once inside the studio. They mentioned this multiple times and had a final security check before heading inside.

The studio size was really impressive! Once we actually made it into the studio I couldn’t believe I was actually there. Once funneled in the producers took people and told you where to sit. The loud, excitable people were placed on the aisles with what I’m calling “regulars” in the middle. My non-rowdy bunch was placed in the middle-back.

After everyone was seated, the music started and everyone was encouraged to dance. We awkwardly bopped along, taking in the studio and the over the top people. Pretty soon Twitch came out and danced which was incredible. And then, filming began! When Ellen came out the cheer and excitement was palpable.

Production staff meant to hype the crowd directed us when to cheer, laugh, clap, and dance. The entire taping was pretty seamless from start to finish with only small breaks for commercial slots and touch-ups. During those breaks Ellen was very focused on prepping or would disappear off the stage. Taping only paused once when they were starting a game and had a technical glitch. Ellen was a pro and conducted her interview with LL Cool J and all of her other bits without stopping or mess-ups. Then, our musical guest was Shania Twain and every audience member got her new CD as a gift.

There was one game at the end with an audience member from a previous episode (so no one from the bungalow earlier). She ended up winning an invite back for 12 Days of Give Aways and she was SO over the top I was convinced we were all winning one too (since Ellen likes to do that). Alas, she was just really excited.

And just like that, the show was done filming and we were clapping and dancing. Ellen addressed us in the audience for the first time, thanking us for coming and encouraging us to be kind to one another.

On the way out we were handed our CD’s and just like that, one of the biggest (seemingly most unattainable) bucket list items was checked off my list!

Double posting cuz Phil just sent me this pic from today sry not sry
Went to go kayaking with the manatees today and only ended up seeing one as we walked next to the river on the way to our car to go home 😭🤷🏻‍♀️
Ate some delicious Greek food at Hellas Restaurant and then explored Tarpon Springs 🌊🧽
The absolute best day spent at the Salvador Dali Museum 👫
Shopping with @jaydems_ in Hyde Park today 😍
It’s my favorite humans birthday!! Excited to spend @martello16 first birthday ever in the warmth and sun 🥳☀️🌴
Loading Comments...
Comment
×
%d bloggers like this: