For those of you that follow me on social know that last weekend we traveled to Long Island to go to the PGA! For my non-golfing friends that is a golf tournament hosted by the Professional Golf Association. I’ll admit that I’m not a big sports fan and don’t typically follow along with many sports teams. My husband, however, is a sports fanatic. Every trip we take we scope out football stadiums or hockey arenas. I don’t share the same passion as he does but his love of sports has resulted in some of my favorite travel memories ever.

Last year when we visited London he insisted we visit the Wimbledon stadium. It wasn’t high on my list but I wanted to compromise since we were spending the next day at the Harry Potter Studio tour (my thing, not so much his ha). But I was wrong because being at Wimbledon was not just a trip highlight, but one of my favorite travel memories ever. If you take anything away from this post, it is to be open to activities and experiences that might not immediately interest you because you never know how wonderfully surprised you might end up! 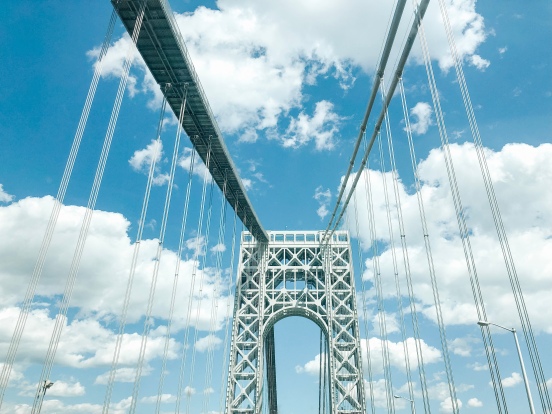 From Rochester to Bethpage (where the PGA was being hosted this year) it took us 7.5 hours to get there. I had actually never been to Long Island before and I underestimated the amount of traffic there would be. Once we hit the city we sat in bumper-to-bumper traffic for 3 hours straight. By the time we go to our Air BnB in Farmingdale (neighboring town to Bethpage), we were exhausted. We had made plans to go into Manhattan to visit some friends and I’m glad we stuck to it despite being so tired! We visited the trendy rooftop bar VERSA and had a great dinner and yummy drinks. 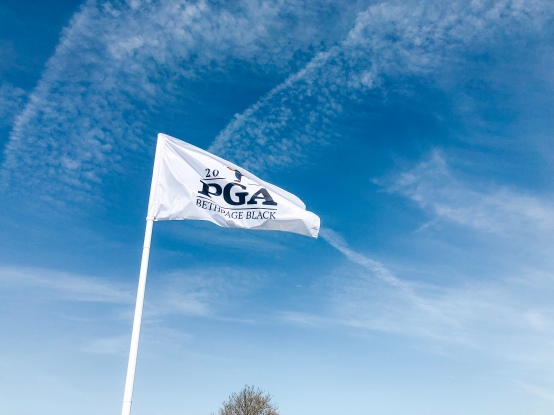 The next day we were up early going see some golf! After a quick shuttle ride to the state park, we unloaded and made our way onto the grounds. We couldn’t have asked for better weather with a beautiful 70-degree day. It was incredible seeing the tents, enormous screens, and walking paths that had been built just for the tournament. The energy was contagious with people excitedly buzzing around.

We decided on a “sit and wait” strategy rather than trying to bounce around holes. If you’ve ever been to a golf tournament before then you know at the tee box and by the flag, layers of people surround the area. This can mean if you’re not in that front layer, you’re 10 people back. And if you’re 5 foot 3 like me, that means you can’t see anything over the sea of people. Our sit and wait strategy paid off though as we hung out on hole 3 for the morning. We were able to see players like Jason Day, Jordan Spieth, and Ricky Fowler just a few feet in front of us! 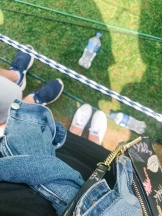 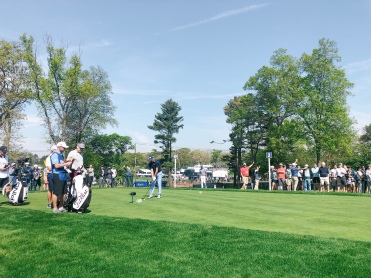 After grabbing a quick bite for lunch, we explored the park grounds also making a pit stop at the store. For any ladies that are going to a similar event, I wanted to comment on what to wear. I saw women wearing things as casual as leggings and sneakers and then women in wedges and dressy outfits. When I was planning for this trip I struggled to decide what to wear! I opted for white sneakers, a simple black tee-shirt dress, and a denim jacket. I was comfortable and fit right in.

Shortly before the afternoon groups began teeing off we headed back out onto the course. One thing I hadn’t anticipated was how much walking we would do. At the end of the day, we walked over 9 miles. We did the same strategy though and hung out on hole 9 getting to see Brooks Koepka (who went on to win the tournament) and Tiger Woods with front row seats. 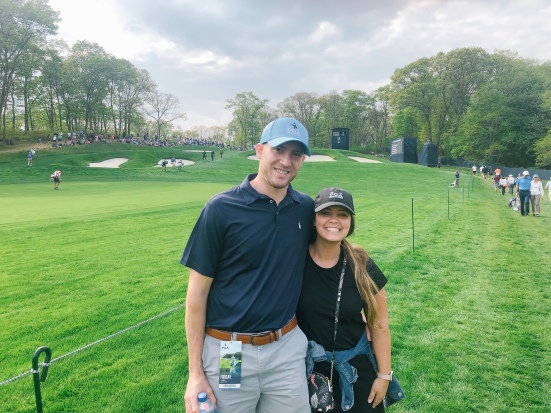 That evening we grabbed a pizza from Gino’s and it was delicious. If you’re in the area, we definitely recommend it. Also notably during one meal of the trip, we were seated next to a few of the player’s caddies (like Ricki Fowlers!) which was really a very cool experience chatting with them.

Overall, the experience ended up pleasantly surprising me just as Wimbledon had done. Although I’ve turned into a bit of a golf lover, I didn’t know if I was going to be bored watching a tournament in person. I was the farthest thing from bored though! Being outside on a beautiful course, watching really talented athletes at your own pace, and soaking in the energy of other fans was so much fun and a great experience.

3 thoughts on “PGA in bethpage, ny”