For anyone that follows me on my personal Instagram page, you know that Phil and I went sky diving earlier this month!!

The skydiving conversations between Phil and I started about a year ago when we were watching one of my favorite shows, The Bachelor. On one of the dates they went sky diving and the entire experience looked amazing. This piqued our interest and we started the conversations of “what if we did that one day?” and “that looked really cool.”

Fast forward to present day where we had a friend recently go and rave about how incredible it was. We had started seriously considering jumping and decided for our anniversary it would be something unique and special to do. With some additional peer pressure and bets from Phil’s friends, we had booked and were ready to go!

After a bit of research and talking with others who have jumped, we booked with Skydive CNY. They have a perfect injury-free record, are family owned and take safety very seriously which is obviously incredibly important when doing something like jumping out of a plane. 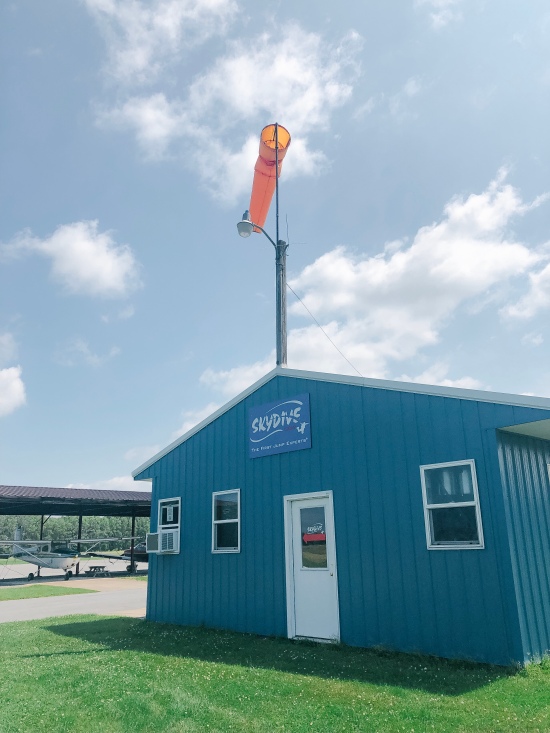 The Friday we were scheduled to go we both woke up with a flood of emotions! We completed all of the waiver paperwork before arriving which saves a lot of time but added to the angst and nerves we were already experiencing. There were nerves alongside anticipation, excitement, curiosity, and fear.

After an hour drive, we arrived at Skydive CNY where we quickly checked in and met our instructors who would be jumping tandem with us. They were both friendly and complete professionals who have done this thousands of times which helped eased my nerves a bit.

We got into our harnesses and went through a quick lesson. There were specific times we were to cross/uncross our arms and we needed to be aware of our legs during the jump and for landing. There was a storm due to roll in during the afternoon so before we knew it we were walking out to the plane. Typically they say to plan on the entire experience (including check-in, training etc.) lasting between 2-4 hours. For us however, things happened much quicker! Looking back though, the quicker the better because it gave us less time to mull over what we were about to do. 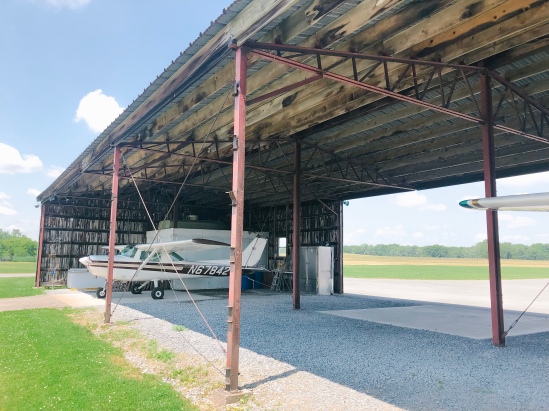 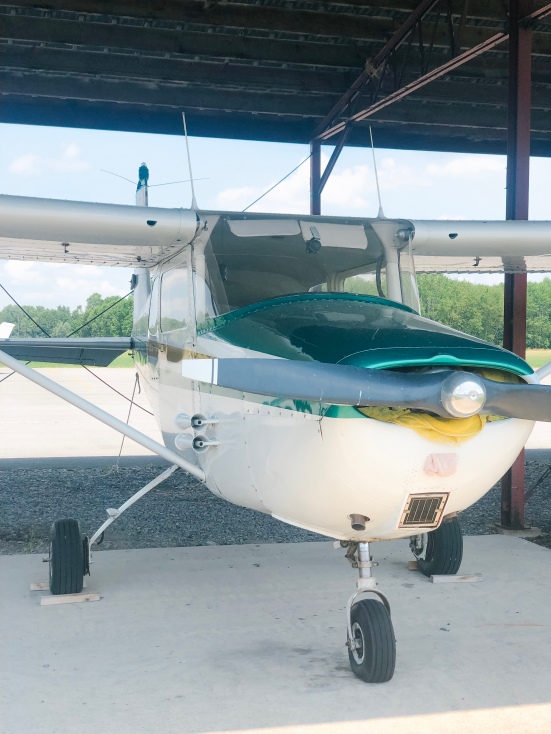 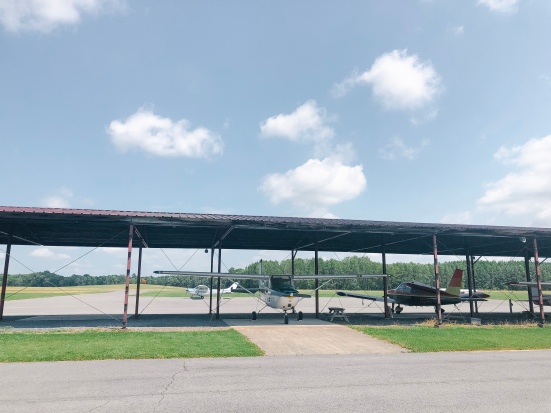 The plane was smaller than my car which is when I truly felt the panic set in. I’m claustrophobic so when I first got in the plane I was ready to bolt. I looked at Phil and asked “do you still want to do this?” He was a bundle of nerves himself but confirmed we weren’t going to back out now which gave me the confidence boost I needed to stay in the plane!

We jumped at an elevation of 10,000 feet. This was a 20-minute plane ride up and high above the clouds. It was beautiful but by far the most nerve-wracking part. It felt like too much time to be thinking about the inevitable jump. People have asked me – yes, you can decide not to jump once up there but the plane is so tiny and loud you’ll likely feel like the safest option is to jump out of the plane ha. Also, you pay for the jump regardless if you actually go through with it or not. 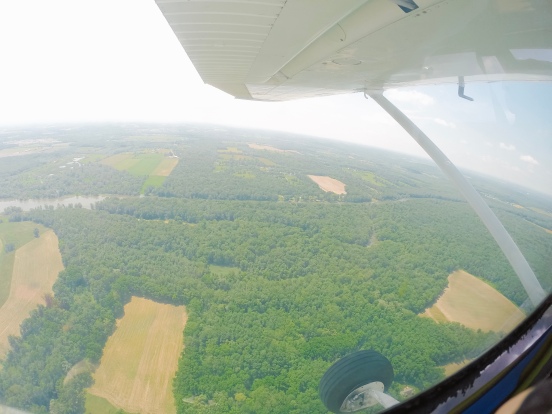 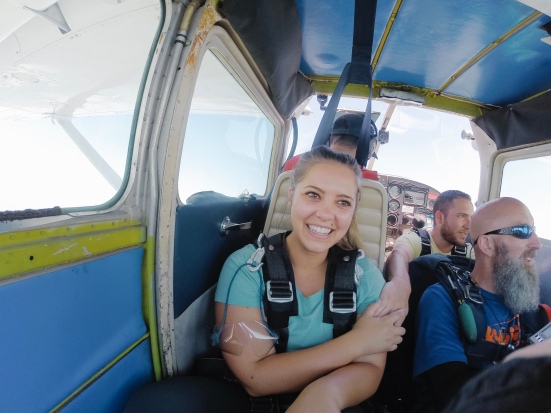 Once we reached the 10,000 feet, our instructors and the pilot talked logistics regarding exactly where we should jump out of. The instructors started buckling things on each of our harnesses and attaching themselves to us and patiently explained to us what they were doing and what the next steps were. When the plane door opened shock and pure adrenaline hit me. There were careful instructions on where we needed to step and duck which is what I was focusing on in my head and before I knew it, Phil had jumped and I was up next. 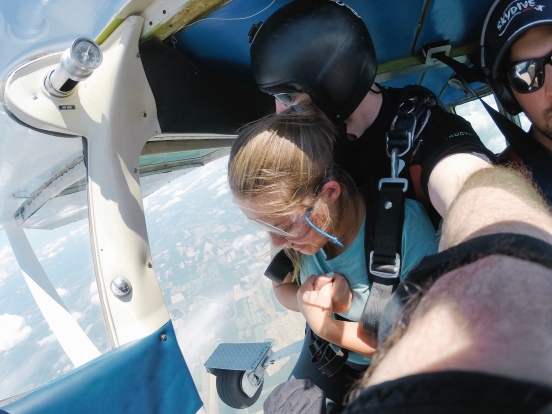 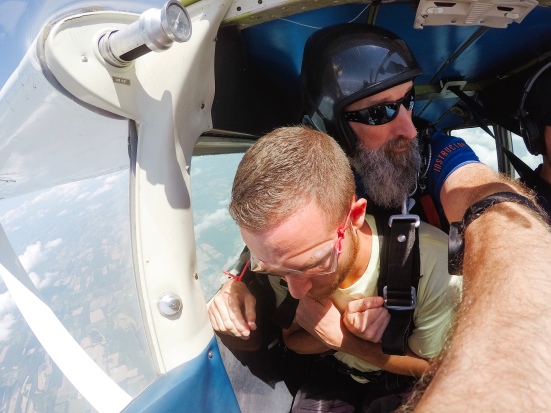 We inched up on our knees, with the instructor now fully strapped to my back, and stepped on the metal plank outside of the plane. The next thing I knew we had pushed off from the plane and were diving down to the Earth, head first! 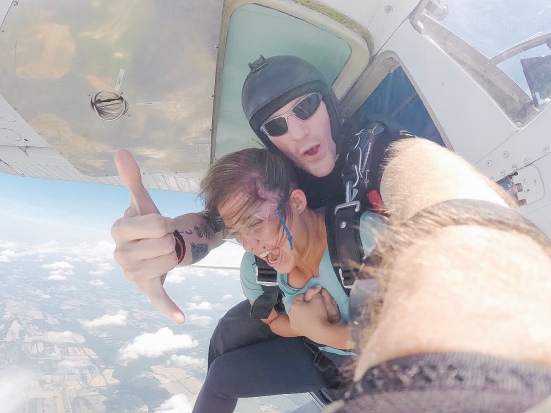 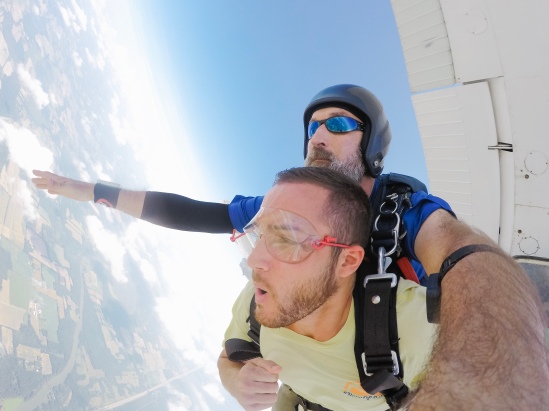 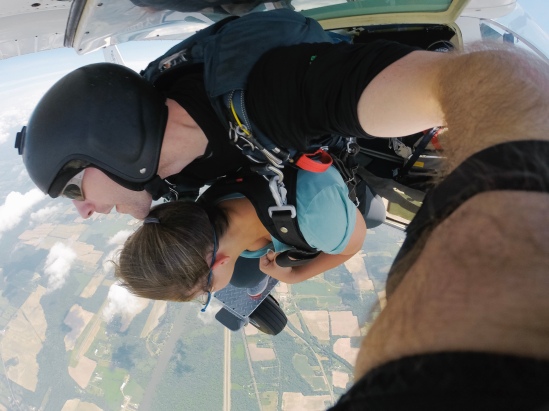 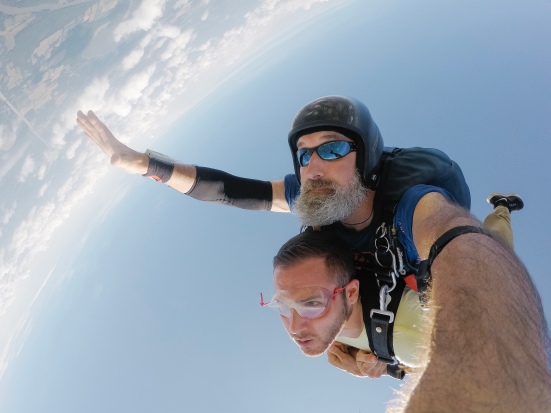 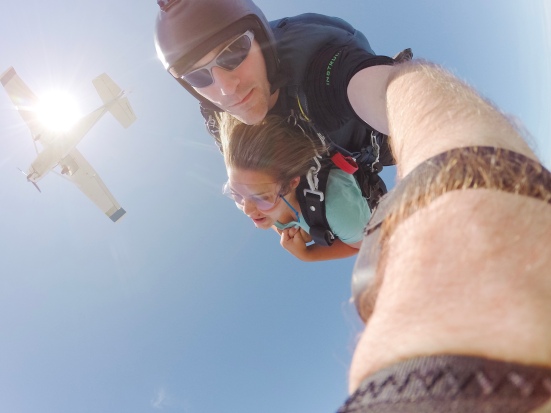 It happened so quickly that the first few seconds I had no coherent thoughts. All I can remember is how intense the wind felt. After nosediving for a few seconds we leveled out to flying down on our stomachs. This part also still feels like a blur and I don’t remember much. Having the pictures and videos was worth it because it was fascinating to see my reaction throughout the process – even for things I couldn’t remember clearly! 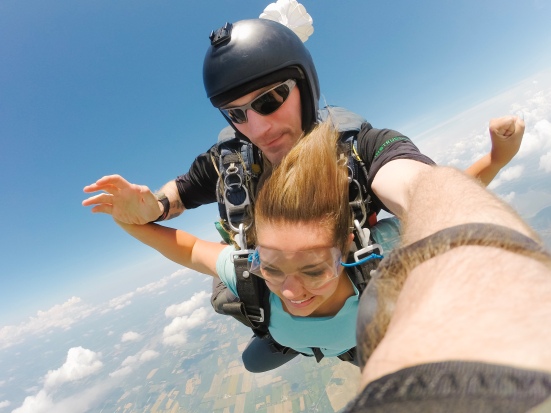 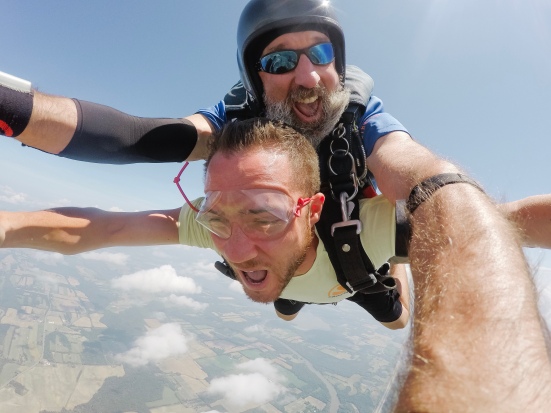 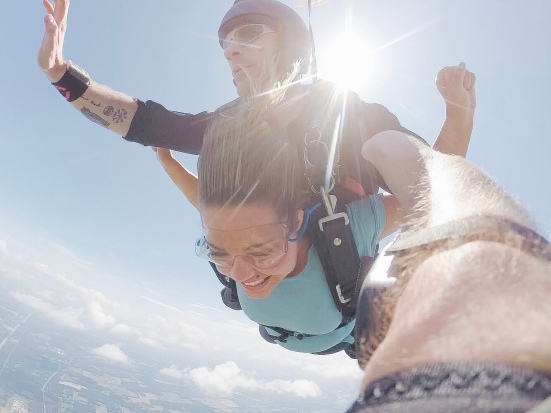 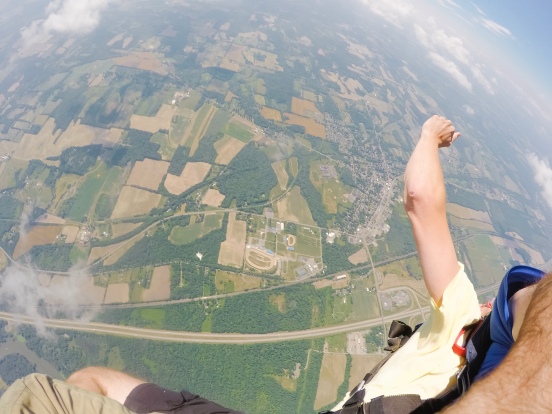 Soon after that, the parachute opens and you’re jolted to an upright position. We were still above the clouds at this point but you can remove your goggles and the pace slows so you’re able to enjoy the stunning views. My instructor told me that most skydiving deaths are caused by people incorrectly operating the parachute which I thought was really interesting and terrifying. While I was up there I tried not to think about it too much. 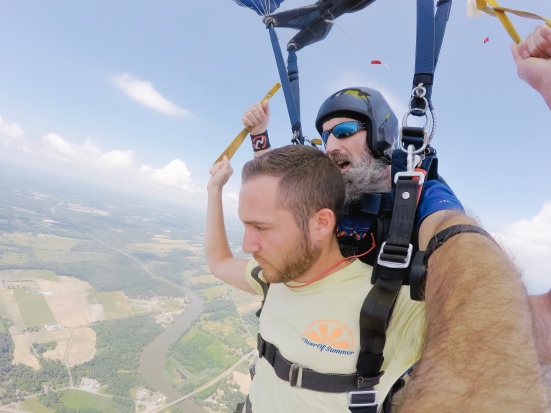 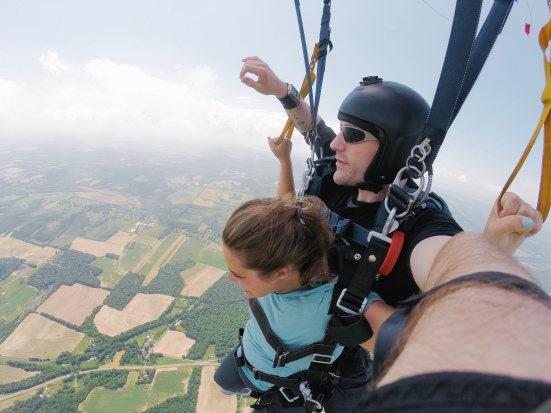 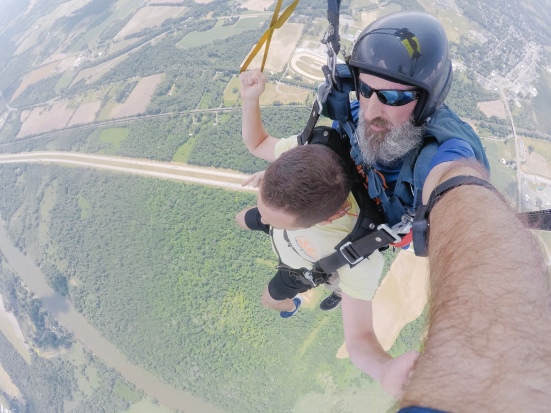 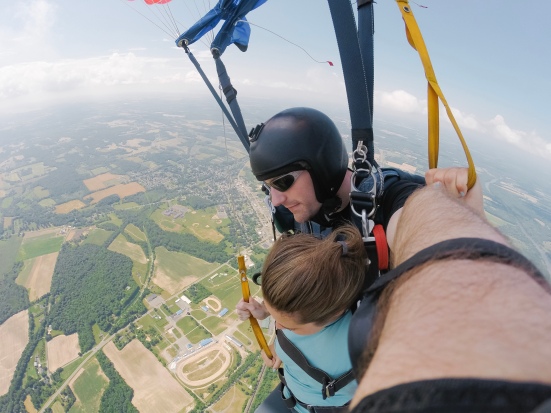 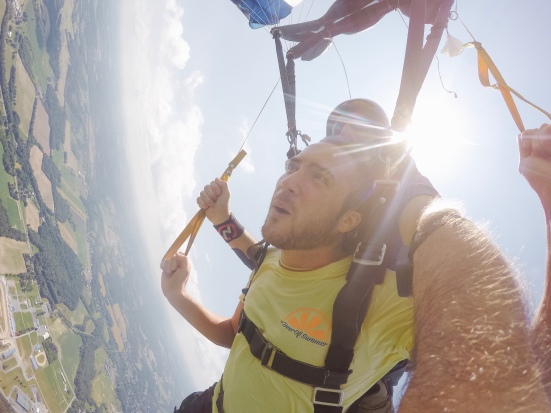 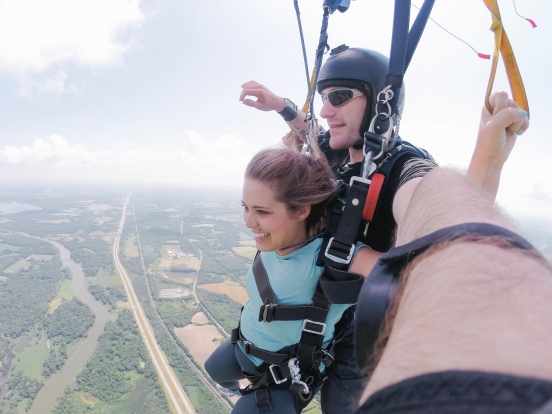 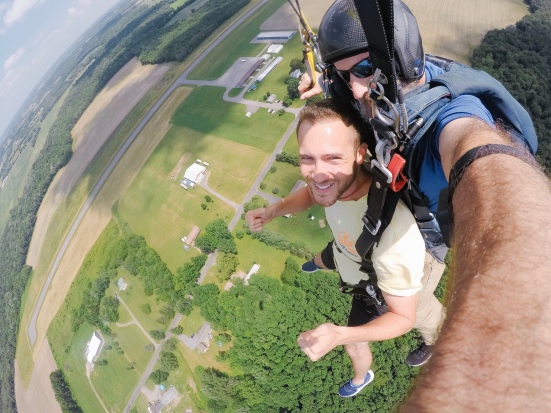 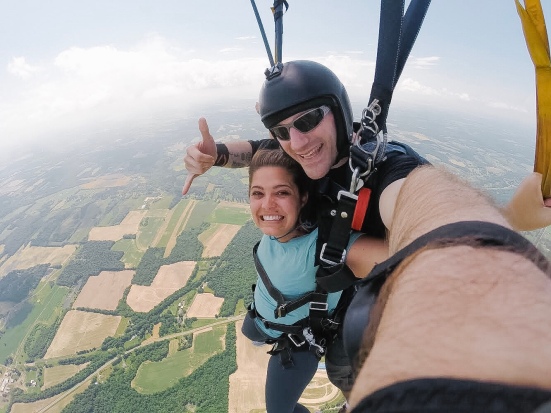 We glided down to the ground which took around 5 minutes. Seeing the green and yellow plots of land and tiny cars driving along the highway was surreal. It was breathtaking and offered a new perspective I never thought I’d have.

After landing (in which you slide in on your butts) it was one of the biggest highs! A huge wash of relief came over me knowing we completed it, saw what we did, and were safe. I was surprised by how proud of myself I felt and the confidence it gave me – I felt like a badass!

Overall, I can’t recommend doing this enough. It pushed us beyond our wildest dreams but was incredible and provided us with such a special perspective. Here are the videos from the day where you can get the full experience! 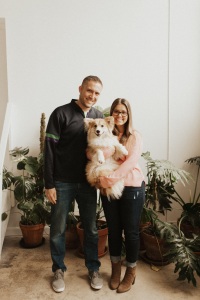