I hope everyone had a great Thanksgiving! It’s been cold and snowy in upstate New York the last few weeks so it feels as though holiday season is now in full swing. Although my current reality is snow boots and Christmas shopping, I’m continuing on with my posts about Disney World. For today, I’ll be posting details on Hollywood Studios which has recently gotten a big upgrade in terms of attractions and things to do.

Hollywood Studios was previously the type of park that could be completed in just a few hours with highlights being Tower of Terror and Toy Story Mania. Now, with the newly built Toy Story Land and Star Wars Land it is a park that will enchant you and offers plenty to do. 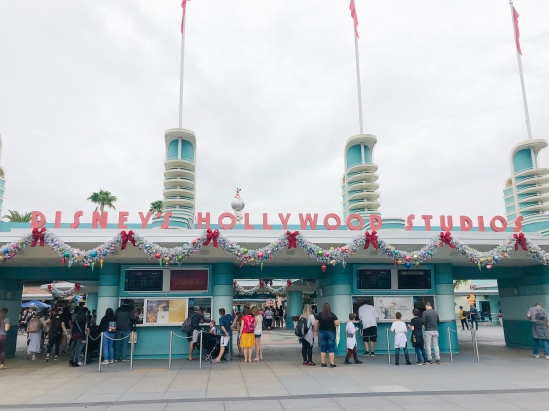 To get to Star Wars Land from the center of the park you walk through a small tunnel. Once on the other side of the tunnel you’re transported to a land with brassy hues and industrial grunge which perfectly fits with the cities we see in faraway lands from the movies. Rogue space ships are parked throughout suggesting that those around you dropped in from another planet. The Stormtroopers carrying guns freely walk around and you may be lucky enough to catch a glimpse of Kyle-Lo-Ren or Rey. I couldn’t believe the size of the land which seemed to stretch turn after turn.

There’s a market that runs through the center with shops entirely themed to a Star Wars experience – and not in the way of simply selling Star Wars t-shirts and gear. There is steam that rises through exposed pipes as you hear droid-like beeps. You can grab a bite at Olga’s Cantina, which requires a reservation, or can grab green milk at a casual stand.

Towards the far edge of the land is the first Star Wars ride to open, Smugglers Run. Although you can’t yet snag a Fast Pass for this ride, the wait is one of the most entertaining of all the rides across all the parks. Sitting outside the entrance is a life size replica of the Millennium Falcon which you have a view of throughout most of your wait. Further inside you feel as though you’ve stepped foot on the ship, long before the ride has even started. Exposed beams and wires cover the ceiling and walls while tools, boxes, and half-finished droids fill up the floor. You can even grab a themed drink while waiting in line!

The ride itself is set as if you’re controlling the ship with each person having their own “job.” The job’s really don’t seem to require much as we were the gunners and we simply had to click a button when it light up however in the 6-person cockpit, you do truly feel as if you’re flying through space. When you inevitably crash into something or cut a tight corner your whole body will shift thinking you actually need to duck!

Also, now open is the much anticipated Galaxy’s Edge which means I already can’t wait until I can go back so I can ride this. Overall, I thought this new land delightfully lived up to the hype. Even those that aren’t huge Star Wars fans can appreciate the meticulous detail that has gone into transporting you to the faraway land.

Based off the fan-favorite Toy Story movies, this land makes you feel as if you’ve shrunk down to the size of a toy. These park elements are a bit further spread apart and if you’re not paying attention, you can easily miss some of the cute details. I enjoyed the green army men that will come out for performances and the overall feeling of nostalgia that being in this area evoked however felt like it was missing just a bit of magic. 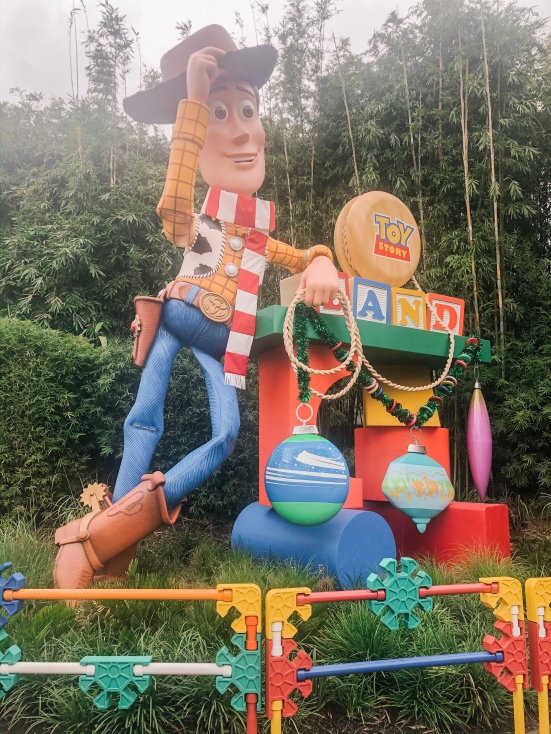 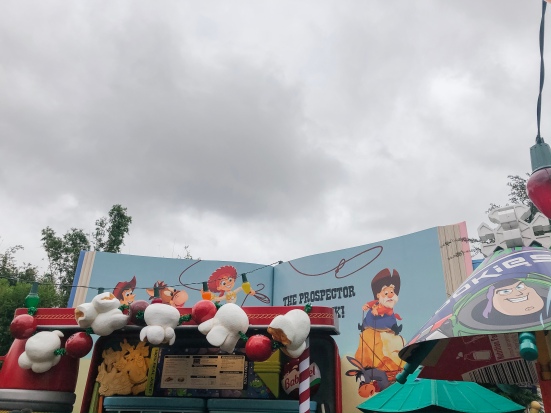 A new crowd favorite is Slinky Dog Dash’s rollercoaster that zips you through Andy’s backyard. This ride is one you need to get a Fast Pass for (if you’re able) otherwise you’ll be waiting in line between 1-2 hours.

The line for this ride zig-zags in tight corners with little to no change in scenery. I was so bored waiting in line! Although the ride itself was fun, it was over quickly and it felt hard for me to reconcile the amount we waited in line for. It’s not a ride that I will right off completely however I would certainly never wait in line for it that long again. 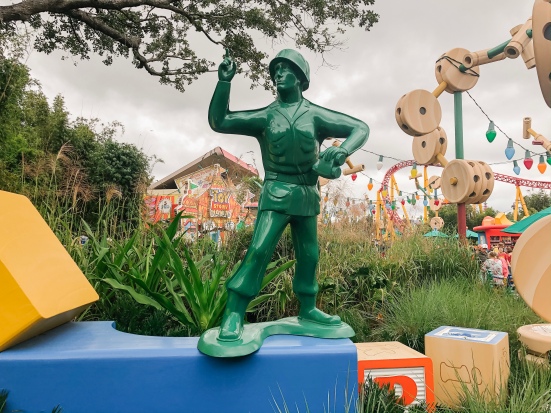 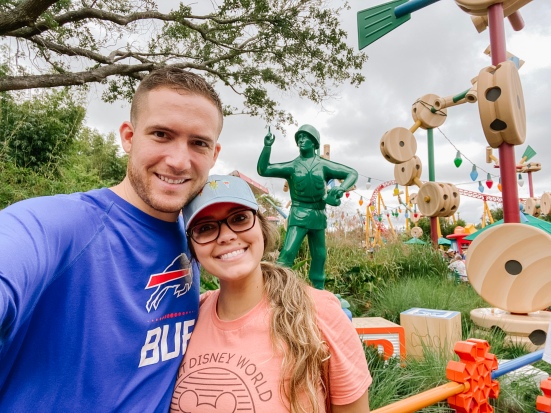 In my opinion, the rides in Hollywood Studios are some of the best. Tower of Terror will always be an ultimate favorite of mine. The line always moves quickly and is enjoyable being mostly shaded and with a concrete wall you can sit on. The ride itself is the ultimate thrill with its sudden drops. For a brief second you’re suspended in the air before gravity pulls you back down, making your stomach flip inside and out. Before riding this ride on our most recent trip we were both feeling tired from the long day but after we had energy buzzing through us from the thrill of it! Rocking Rollercoaster and Toy Story Mania are other favorites. The wait times for these rides are notoriously long though so if you’re using Fast Passes in this park, it’s worthwhile using one on one of these rides. 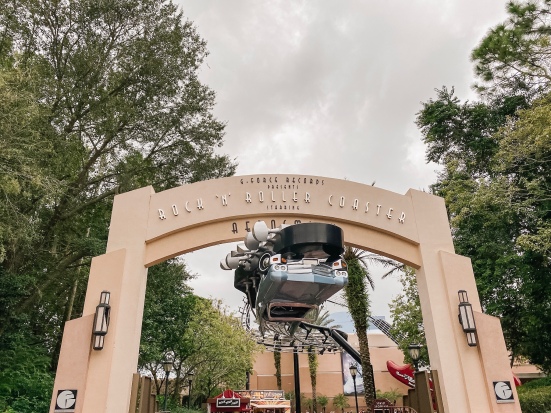 The Skyliner is a gondola lift that will take you from Hollywood Studios to a few resorts or from Hollywood Studios directly to Epcot. This was honestly one of the highlights of our day! They move efficiently so odds are you won’t have to wait. You gently glide in-between parks which offers up some pretty views. They’re brand new too so they’re squeaky clean. 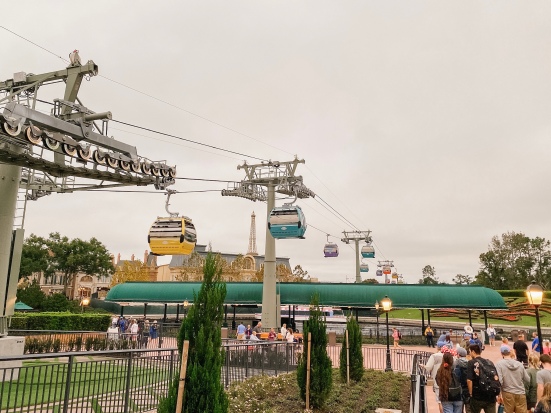 The entertainment is some of the best in Hollywood Studios. With a large theatre/stage that seats many, you can catch Beauty & The Beast, Fantasmic!, Indiana Jones, and Frozen. Outside of Star Wars Land there’s also a small stage that features Storm Troopers with a Darth Vadar show. 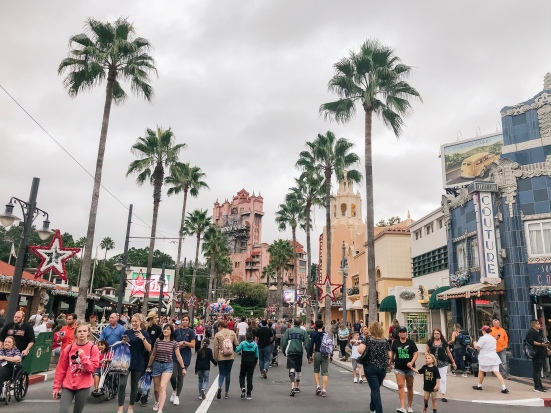 There are unique options within the lands themselves but there are other good options throughout the park. For quick service we grabbed lunch at the ABC Commissary. There are lots of tables/booths to sit at and it requires no reservation which is great for popping in when you’re hungry. Fairfax Fareis another good stop right on Sunset Boulevard serving salads and pulled pork sandwiches.

Hollywood Studios certainly partakes in the holiday fun and is decked out with garland, ornaments, and a big Christmas tree. During Christmas if you’re going to Disney World then Magic Kingdom is a must but you still get a nice dose of the holiday spirit here as well.

Double posting cuz Phil just sent me this pic from today sry not sry
Went to go kayaking with the manatees today and only ended up seeing one as we walked next to the river on the way to our car to go home 😭🤷🏻‍♀️
Ate some delicious Greek food at Hellas Restaurant and then explored Tarpon Springs 🌊🧽
The absolute best day spent at the Salvador Dali Museum 👫
Shopping with @jaydems_ in Hyde Park today 😍
It’s my favorite humans birthday!! Excited to spend @martello16 first birthday ever in the warmth and sun 🥳☀️🌴
Loading Comments...
Comment
×
%d bloggers like this: