I’m behind on posting my reading recaps! I started a new job and we’ve been traveling a ton so it hasn’t felt like there’s been any time for blogging. To make up for it, here’s a 2 month round-up.

A Court of Thorns and Roses by Sarah J. Maas. 4/5 ⭐️  “When nineteen-year-old huntress Feyre kills a wolf in the woods, a terrifying creature arrives to demand retribution. Dragged to a treacherous magical land she knows about only from legends, Feyre discovers that her captor is not truly a beast, but one of the lethal, immortal faeries who once ruled her world. At least, he’s not a beast all the time. As she adapts to her new home, her feelings for the faerie, Tamlin, transform from icy hostility into a fiery passion that burns through every lie she’s been told about the beautiful, dangerous world of the Fae. But something is not right in the faerie lands. An ancient, wicked shadow is growing, and Feyre must find a way to stop it, or doom Tamlin-and his world-forever.”

I can’t say enough good things about this series and this first book! I was a bit unsure as I don’t read a ton of fantasy books but was immediately intrigued by the world and characters in the novels. I don’t want to give away too much but there is action, magic, drama, and romance built in a universe that is fantastical yet still feels relatable and real.

A Court of Mist and Fury by Sarah J. Maas. 5/5 ⭐️  I’m purposely not including the description for this book and any subsequent books in the series because I don’t want to give away anything that happens but this book was my favorite in the series with a tremendous follow-up to the first book. There were twists that I didn’t see coming but now looking back, made perfect sense for character growth and development. My advice to you if you start reading this series is to avoid Googling anything related to the series! My best friend had recommended I avoid any online searching and it was the best decision. Being surprised throughout the series was the best.

A Court of Wings and Ruin by Sarah J. Maas. 5/5 ⭐️   This book was a beast that packed in action and romance in an epic way. Threads from the first two books were pulled loose and split wide open in a way that was absolutely captivating. Maas has created an entire world with complexities, depth and interest that rival that of Harry Potter and Game Of Thrones.

Malibu Rising by Taylor Jenkins Reid. 2/5 ⭐️  “Malibu: August 1983. It’s the day of Nina Riva’s annual end-of-summer party, and anticipation is at a fever pitch. Everyone wants to be around the famous Rivas: Nina, the talented surfer and supermodel; brothers Jay and Hud, one a championship surfer, the other a renowned photographer; and their adored baby sister, Kit. Together the siblings are a source of fascination in Malibu and the world over—especially as the offspring of the legendary singer Mick Riva. The only person not looking forward to the party of the year is Nina herself, who never wanted to be the center of attention, and who has also just been very publicly abandoned by her pro tennis player husband. Oh, and maybe Hud—because it is long past time for him to confess something to the brother from whom he’s been inseparable since birth. Jay, on the other hand, is counting the minutes until nightfall, when the girl he can’t stop thinking about promised she’ll be there. And Kit has a couple secrets of her own—including a guest she invited without consulting anyone. By midnight the party will be completely out of control. By morning, the Riva mansion will have gone up in flames. But before that first spark in the early hours before dawn, the alcohol will flow, the music will play, and the loves and secrets that shaped this family’s generations will all come rising to the surface.”

The book of the summer that everyone has read or has on their To Be Read list! Maybe my expectations were too high but I didn’t like this book at all. There were too many characters and storylines that felt half-baked. By the end I was flying through it just to get it over with.

We Could Be Hero’s by Mike Chen. 2/5 ⭐️  “Jamie woke up in an empty apartment with no memory and only a few clues to his identity, but with the ability to read and erase other people’s memories—a power he uses to hold up banks to buy coffee, cat food and books. Zoe is also searching for her past, and using her abilities of speed and strength…to deliver fast food. And she’ll occasionally put on a cool suit and beat up bad guys, if she feels like it. When the arch-rivals meet in a memory-loss support group, they realize the only way to reveal their hidden pasts might be through each other. As they uncover an ongoing threat, suddenly much more is at stake than their fragile friendship. With countless people at risk, Zoe and Jamie will have to recognize that sometimes being a hero starts with trusting someone else—and yourself.”

This was an option from Book of The Month which usually is on point but I ended up being disappointed. At first the intrigue of these characters with super powers who have no memory was fascinating! But the pacing of the book felt off and the characters were too one dimensional to really connect with.

Get A Life Chloe Brown by Talia Hibbert. 2.5/5 ⭐️  “Chloe Brown is a chronically ill computer geek with a goal, a plan, and a list. After almost—but not quite—dying, she’s come up with seven directives to help her “Get a Life”, and she’s already completed the first: finally moving out of her glamorous family’s mansion. The next items? Enjoy a drunken night out. Ride a motorcycle. Go camping. Have meaningless but thoroughly enjoyable sex. Travel the world with nothing but hand luggage. And… do something bad. But it’s not easy being bad, even when you’ve written step-by-step guidelines on how to do it correctly. What Chloe needs is a teacher, and she knows just the man for the job. Redford ‘Red’ Morgan is a handyman with tattoos, a motorcycle, and more sex appeal than ten-thousand Hollywood heartthrobs. But when she enlists Red in her mission to rebel, she learns things about him that no spy session could teach her. Like why he clearly resents Chloe’s wealthy background. And why he never shows his art to anyone. And what really lies beneath his rough exterior.”

A cute romance novel that I enjoyed! Chloe, the protagonist, was quirky and filled with depth I felt like she was a real person. Although it was cute, ultimately it was a bit forgettable so not one I would say to rush out and read.

A Court of Frost and Starlight by Sarah J. Maas. 4/5 ⭐️  This book was almost like an interlude and was a very quick read! I liked it a lot because it helped to set-up some new primary characters in a way that would have felt abrupt had this book not existed.

A Court of Silver Flames by Sarah J. Maas. 5/5 ⭐️  Wow this book was incredible and no small feat to read clocking in just shy of 800 pages. This book highlighted new characters while still building on existing storylines in a seamless way. After binge reading this entire series I’m now at a loss while I wait for the next book to come out!

The 22 Murders of Madison May by Max Barry. 2.8/5 ⭐️  “I love you in every world. Young real estate agent Madison May is shocked when a client at an open house says these words to her. The man, a stranger, seems to know far too much about her, and professes his love–shortly before he murders her. Felicity Staples hates reporting on murders. As a journalist for a midsize New York City paper, she knows she must take on the assignment to research Madison May’s shocking murder, but the crime seems random and the suspect is in the wind. That is, until Felicity spots the killer on the subway, right before he vanishes. Soon, Felicity senses her entire universe has shifted. No one remembers Madison May, or Felicity’s encounter with the mysterious man. And her cat is missing. Felicity realizes that in her pursuit of Madison’s killer, she followed him into a different dimension–one where everything about her existence is slightly altered. At first, she is determined to return to the reality she knows, but when Madison May–in this world, a struggling actress–is murdered again, Felicity decides she must find the killer–and learns that she is not the only one hunting him. Traveling through different realities, Felicity uncovers the opportunity–and danger–of living more than one life.”

Such a cool concept and a book I was really excited about. Parts were actually a lot darker and creepier than I expected as it ended up being more thriller than sci-fi. I was hooked from the beginning but Barry lost me as he glossed over logistical details that are needed to explain complex themes such as time travel.

Instructions for Dancing by Nicola Yoon. 3/5 ⭐️  “Evie Thomas doesn’t believe in love anymore. Especially after the strangest thing occurs one otherwise ordinary afternoon: She witnesses a couple kiss and is overcome with a vision of how their romance began . . . and how it will end. After all, even the greatest love stories end with a broken heart, eventually. As Evie tries to understand why this is happening, she finds herself at La Brea Dance Studio, learning to waltz, fox-trot, and tango with a boy named X. X is everything that Evie is not: adventurous, passionate, daring. His philosophy is to say yes to everything–including entering a ballroom dance competition with a girl he’s only just met. Falling for X is definitely not what Evie had in mind. If her visions of heartbreak have taught her anything, it’s that no one escapes love unscathed. But as she and X dance around and toward each other, Evie is forced to question all she thought she knew about life and love. In the end, is love worth the risk?”

An easy romance novel and a good beach read! A cute and quick read although a bit juvenile. 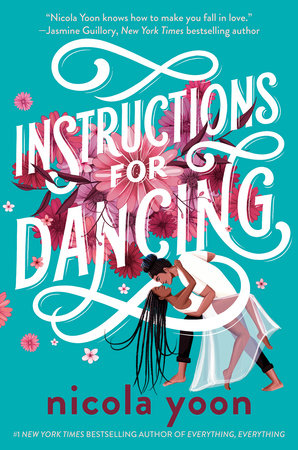 One thought on “June and July’s Reading Recap”

Leave a Reply to I'm All Booked Up YA Cancel reply